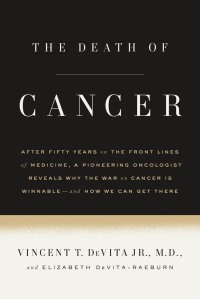 We seniors all have our little ways of whistling past the graveyard. Some avoid making a will. Some avoid completing an advance directive. For years, I’ve avoided reading about cancer. This is not acceptable in a common-sense senior, so when I saw that Dr. Vincent DeVita’s book, The Death of Cancer, was getting good reviews, I decided to mend my ways.

Perhaps it’s just as well that I waited, since the book is an education in the tremendous progress that has been made against cancer over the past few decades — so much progress that DeVita predicts “the end of cancer as a major public health issue.” No one could be better qualified to make such a judgement. DeVita has been a clinician and cancer researcher since the 1960s, director of the National Cancer Institute, physician in chief at Memorial Sloan Kettering Cancer Center, director of Yale University’s Cancer Center, and president of the American Cancer Society.

Thanks to advances in chemotherapy, the use of combined therapies, immunotherapy, and other progress, childhood leukemia, Hodgkins disease, and several other types of advanced lymphoma are now almost completely curable. Mortality from colon cancer and breast cancer has dropped sharply, and major advances have been made against ovarian cancer, advanced melanoma, prostate cancer, and even lung cancer.

Mary Lasker, presenting an award in 1957

This progress has been achieved largely through government programs and government spending — something those who want to slash the federal budget should think about. Government efforts got a big boost in 1971, when President Nixon, with bipartisan support in Congress, launched the War on Cancer. DeVita is fascinating on the role of Mary Lasker, philanthropist, socialite, and skillful manipulator of vain politicians, in making the War on Cancer possible through passage of the National Cancer Act.

Of course, the War on Cancer hasn’t been a happy story of a straight-line advance to victory. The original goal of conquering cancer by 1976, the bicentennial year, was adopted by Lasker as a lobbying tool, but was never realistic. That original goal has sparked numerous damaging stories over the years about the failure of the War on Cancer — a claim that DeVita is at pains to debunk.

His tale, however, is full of descriptions of epic clashes between institutions, departments within institutions, and famous physicians that make the reader grateful we’ve gotten as far as we have. Renowned cancer centers have resisted adopting new and better approaches or modified treatment protocols for unscientific reasons, rendering them ineffective. Surgeons have persisted in performing disfiguring radical mastectomies to treat breast cancer, despite evidence that lumpectomy followed by chemotherapy is more effective in preventing recurrence. DeVita even suggests that some physicians have continued using outdated treatments of various sorts, and denounced those advocating new approaches, simply because their incomes depended on it.  He is particularly biting in criticizing the Food and Drug Administration for delays in approving new drugs for use in cancer patients who have no other option than death.

The Death of Cancer is a gripping, highly informative book that is well worth reading. But what does it mean for a common-sense senior who faces a cancer diagnosis? Or who faces such a diagnosis in a loved one? Where do we turn? How do we find the best treatment? Common Sense for Seniors will look at these issues in an upcoming post.