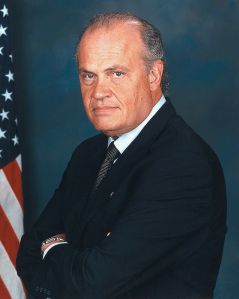 Fred Thompson in his Senate days

Former Senator Fred Thompson, who died on Sunday, seems to be benefiting from that ancient Roman dictum, “de mortuis nihil nisi bonum” — “of the dead, speak only good.”

Thompson’s New York Times obituary refers to his “life in public service,” while the Washington Post quotes Senator Lamar Alexander calling Thompson “one of our country’s most principled and effective public servants.” His role in the TV show Law & Order is being warmly remembered, and the failure of his 2008 presidential bid is evoking notes of regret from the commentators.

You would never know from reading Thompson’s obituaries — or listening to the NBC Sunday night news, not to mention Cokie Roberts on NPR — that since 2010 Thompson had been hawking reverse mortgages to seniors on television.

(The exception here is Fox News, which briefly mentions Thompson’s reverse mortgage ads in its obituary. Fox News should know. It aired a Thompson ad as recently as Sunday morning.)

Seniors, however, are all too familiar with Thompson’s work on behalf of reverse mortgages. We’ve seen him over and over again telling us that reverse mortgages are the way to get the cash we need to enjoy our retirement. There’s no catch, Thompson tells us, adding that President Reagan himself signed into law the reverse mortgage authorizing legislation in order to help seniors remain in their homes.

The problem is that reverse mortgages are full of catches.  Borrowers can in fact lose their homes if they fail to pay taxes or keep up with repairs — or if they’re absent from the home for more than six months. Borrowers can outlive the cash they obtain from a reverse mortgage, or spend it unwisely, and have to sell after all, losing the equity they took out of the home. Reverse mortgages may be right for some people in certain circumstances, but they can easily get borrowers into trouble.

That’s why it always seemed unfair to me for Thompson to capitalize on the good feelings seniors had toward him due to his past public roles in order to sell a potentially risky product.

The Consumer Financial Protection Bureau warned in June that

“Ads for reverse mortgages are found on television, radio, in print, and on the internet, and many ads feature celebrity spokespeople discussing the benefits of reverse mortgages without mentioning risks. We looked closely at many ads and found incomplete and inaccurate statements used to describe the loans. In addition, most of the important loan requirements were often buried in fine print if they were even mentioned at all. These advertisements may leave older homeowners with the false impression that reverse mortgage loans are a risk-free solution to financial gaps in retirement.”

It’s fine to try to remember the good things about Fred Thompson, but he was a public figure whose life merits a comprehensive examination in the media. Seniors certainly have reason to ask whether, in the last years of his life. Fred Thompson dealt with us fairly.