Far above New York’s Tompkins County, the Greensprings Natural Cemetery Preserve is offering an environment-friendly alternative to traditional burial, while preserving 130 acres of rolling high meadows and woods for future generations to enjoy. 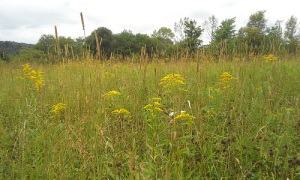 A meadow at Greensprings

Each year in cemeteries around the country tons of embalming chemicals, scarce tropical hardwoods, steel, or copper used for caskets, and concrete grave liners go into the ground for no purpose other than to preserve a body that nature intended to decompose. Greensprings lets the natural decomposition process occur.

On Tuesday, Donna and I took a tour of Greensprings with Jennifer Johnson, co-director. Intermittent sun lit the wildflowers spread across the land, which is mowed only once a year – in the fall, after birds that nest on the ground have left. In the cemetery’s ATV, Jennifer took us to the Leopold Overlook, which at 1840 feet (according to my altimeter app,) has nearly 360 views extending as far as Pennsylvania’s Endless Mountains.

Wildflowers on a grave

As we bounced along the paths cut through the meadows, we would occasionally see a recent grave, just a low mound covered with straw. On many of the older graves, native wildflowers were in full bloom, keeping both the bees and butterflies busy. Some graves were marked by stones, flush with the ground, with carved inscriptions; but it seemed that most buried here, or their relatives, had chosen to leave the graves unmarked. Jennifer told us that more and more often shrouds made of natural material are being used for burials, although biodegradable coffins are also permitted. There is a grove where ashes may be interred, although some in the green burial movement worry that cremations are harmful to the environment.

In addition to the cemetery’s mission to promote green burials, there is the commitment to restore the land to its native state. Volunteers work to eradicate invasive species, while the guidelines for naturalizing the grave sites require specific plants that are native to the region. Staff assist with the marking of graves by identifying local stones that are suitable for engraving and embedding in the site, although families are allowed to provide their own markers.

Greensprings is well worth a visit. Jennifer says that people often come just to picnic, watch the birds (including meadowlarks, bobolinks, and woodcocks), study the insects, or admire the autumn leaves. If you’re interested in staying forever, a plot costs $1,000, and eventual interment costs the same. A percentage of the cost is committed to a fund to maintain the land in perpetuity.

The green burial movement is spreading, from Congressional Cemetery in Washington, DC, to Gambier, Ohio (near Kenyon College), to California.  Do you have green cemeteries in your area? What do you think of them?

1 thought on “The Green Burial Alternative”