In Leisureville, Andrew Blechman mentions meeting a recent widow who was feeling helpless because she had never learned to pump gas. That may sound unusual, but in fact Donna and I had a close relative who found herself in the same situation. Attendants in gas stations sometimes wouldn’t help her because they couldn’t leave the cash register. If someone did come out, he or she typically acted annoyed. Finally, a good samaritan wrote down step by step instructions for our relative, and she was able to cope. 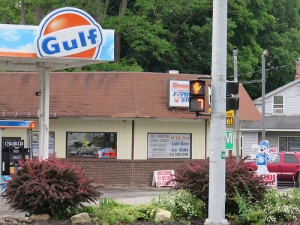 I used to tell the story of our relative to friends, thinking it so odd, but I soon learned that the phenomenon of women not pumping gas is more widespread than I had realized. Friends and friends of friends do not pump. Back in 1983, someone actually wrote a book entitled Real Women Don’t Pump Gas. This attitude may have led directly to the recent report of a new widow weeping at the pump.

Husbands: if you have thought it your responsibility to keep the car gassed up all these years, you are a true gallant. But common sense dictates that you transmit the knowledge of this mystery to your beloved at the earliest possible moment. Checkout time is often not announced.